Political thriller based on the acclaimed 2003 BBC mini-series. With the action transposed from Westminster to Washington, the film follows the investigations of journalist Cal McAffrey (Russell Crowe) as he probes into the suspicious death of the mistress and former research assistant of ambitious up-and-coming Congressman and potential presidential candidate Stephen Collins (Ben Affleck). As he works alongside the police on the case, McAffrey becomes romantically involved with the Congressman’s estranged wife, Anne (Robin Wright Penn).

Be the first to review “State of Play (12)” Cancel reply 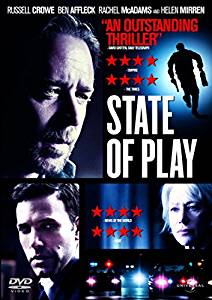