Comedy drama from director Alexander Payne starring George Clooney as a lawyer forced to rethink his approach to life after his wife is hospitalised following a serious accident. As trustee for a large estate, Matt King (Clooney) has had a fairly easy life to date. Living in the tropical island of Hawaii, with his financial future secure, King has grown complacent to an extent that is only brought home to him when a boating accident sends his wife, Elizabeth (Patricia Hastie), into a coma. Left in sole charge of the daughters he has largely neglected, Scottie (Amara Miller) and Alex (Shailene Woodley), Matt is called to face his responsibilities as an adult. However, when he discovers that Elizabeth had been having an affair in the months leading up to the accident, a test of his newfound emotional maturity is presented. Matt sets out to confront Elizabeth’s lover and to find out the truth underlying the affair. The film won the Academy Award for Best Adapted Screenplay.

Be the first to review “The Descendants (15)” Cancel reply 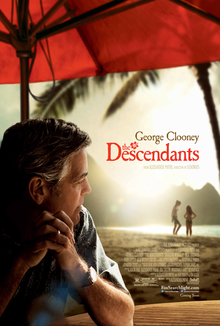