This hard-hitting, coming-of-age drama was the directorial debut of production designer Catherine Hardwicke and was co-written by her and 13-year-old lead actress Nikki Reed. Anxiously trying to fit into the peer-pressure cooker environment of junior high, 13-year-old Tracy (Evan Rachel Wood) goes to shocking lengths in order to befriend Evie (Reed), the most popular girl in school, and also a manipulative liar. Much to the horror of Tracy’s fun-loving mother Melanie (Holly Hunter), the two become inseparable, the mother/daughter relationship breaks down and Melanie realises that she may not be able to rescue Tracy from a whirlwind of drugs, sex and crime. The film was based partly on Reed’s own experiences and won an award for the director at the Sundance Film Festival.

Be the first to review “Thirteen (18)” Cancel reply 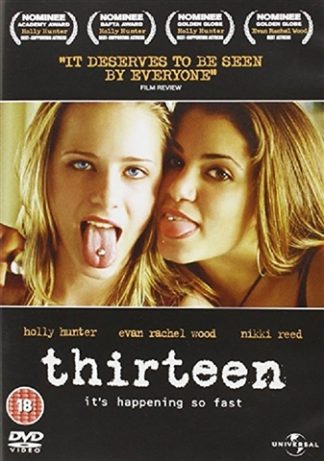